The world will miss a man with a tremendous heart, an infectious smile, and loving laugh. Please take a moment to celebrate one of the greats. 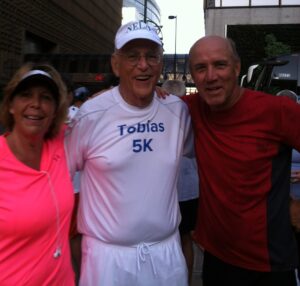 Paul no doubt will be remembered for being a champion for workers’ rights, as the Founder of the National Employment Lawyers Association and Workplace Fairness, and as a prolific writer. He was the local leader and inspirational voice of the Cincinnati Employment Lawyers Association. (CELA was renamed in 2018 as the “Paul H. Tobias Chapter of NELA”, when he moved to Idaho Falls, Idaho to be closer to family.) His law firm, Tobias, Kraus, & Torchia (nka Tobias, Torchia, and Simon) is nationally known for its fierce advocacy for employees. Thousands of individuals were helped by Paul’s thoughtful counsel. We could go on and on about his legal accomplishments (and his ability as a swimmer, skier, and tennis player) into his 80s.

But Paul was much more than a lawyer. He was a husband, father, and grandfather. Paul was a listener, a mentor, a friend, someone you could reach out to for advice on any subject at a moment’s notice. “How can I help?” was his calling card. He was “The Founder” precisely because of how much he cared for others, how much he tirelessly rallied others to advance employee rights. While he deserved countless expressions of gratitude, he more often than not turned the tables by saying “Thank you for everything you are doing.”

When I began my solo practice on December 1, 1990, I received a call just two days later. On the phone was someone I had watched passionately represent employees since August, 1982, when I started a 100 month stint at a defense firm. That experience on the other side, not to mention his drubbing of our client in an age discrimination trial, motivated me to find religion and switch sides. When I picked up the phone, I heard the now familiar greeting: “Randy, Paul Tobias here, how can I help you?”

I was shocked by the call. I admired him, but I assumed he was now a competitor. How wrong I was. I would find that Paul would help me regardless but, through a series of lunches over the coming months, he also explained the simple truth that there were more employees that need help than there are lawyers willing to choose a difficult, uphill line of work. Paul explained the “Just Cause Conspiracy” that became the rallying cry for NELA. I became what I wanted to become, a true believer, because of his inspiration.

NELA embodies the spirit of Paul. Lawyers helping each other, celebrating successes, and commiserating over defeats. His vision – the annual conference – became an event to renew the desire to keep on fighting for employees who have the deck largely stacked against them. Paul organized international trips with NELA lawyers to explore the employment laws of other countries. These trips were a reflection of his own intellectual curiosity, his joy in being with others who shared his passion, and his desire to learn from, and meet, other people.

Over the years, his friendship was remarkable and I grew to love Paul. We had regular lunches during which we joked about our regular agenda – NELA, CELA, Workplace Fairness, our respective cases, and our dream of a local clinic. We laughed about his work with the CIA after World War I – “now, if I told you more, I’d have to kill you!” Paul somehow worked “the McCabe case” – the case he won against my client into our discussions with his trademark smile on his face. It became a regular joke. The Red Squirrel sandwich shop hosted us, and the servers always greeted Paul with a smile as he came through the door.

Throughout all the years, I learned something very important from Paul about the practice of law: the fundamental importance of counselling people. It is not always a question of whether someone has a “good” case; more often, it is the ability to listen to them and help advise them as they move forward. Paul often talked about how much he enjoyed counselling workers more than any other aspect of his practice. Counselling, echoing Abraham Lincoln, was his stock in trade.

Thousands of individuals were helped by Paul’s thoughtful counsel. We could go on and on about his legal accomplishments into his late 80s.

Rest in peace, Paul H. Tobias. Thank you for everything you did during a life well lived. You made a difference. You will be missed.

Bernard Alexander, III prosecutes demanding private and public sector employment cases. He has tried over sixty cases to verdict with seven- and eight-figure judgments for claims of discrimination, harassment, and retaliation based on gender, race, age, sex, sexual orientation, and disability, among other things. Over the last 9 months his verdicts include: (1) $3 million for a security guard terminated for “job abandonment” after he took emergency leave from work to care for his school age daughter (February 2018); (2) $5.3 million for a 25-year FedEx employee fired after not having his disability accommodated (March 2019); (3) $1.3 million for CFRA retaliation, for a 29-year employee terminated before his return from leave (April 2019); and $100,000 in a Title IX retaliation case where a Girls’ Soccer Coach complained of unequal treatment compared to boys sports (Sept 2019). Board Member of the National Employment Lawyers Association; Past Chair of the California Employment Law Association; 2016 CELA Joe Posner Award Recipient; 2019 Top 100 Attorneys in California; Top 75 California Labor and Employment Lawyer (2012 to present); Top 100 Southern California Super Lawyers (2015 to present); American Board of Trial Advocates (ABOTA): Associate 2013.